Since his 2017 arrival as an undrafted rookie out of Eastern Washington, Bourne has sweated out cutdown day each of the past two years.

Although Bourne led all Niners wide receivers in receptions and yards in 2018, he doesn’t expect this year to be any different for him as coach Kyle Shanahan, general manager John Lynch and their respective staffs sort through a group of wideouts that has potential but lacks proven production and panache.

That’s why Bourne readily admits that this is a “make-or-break year for a lot of us.” Although he tries not to focus on it too much, he finds himself running the numbers on how the receiving corps might shake out when the Niners trim their roster to 53 on Aug. 31. 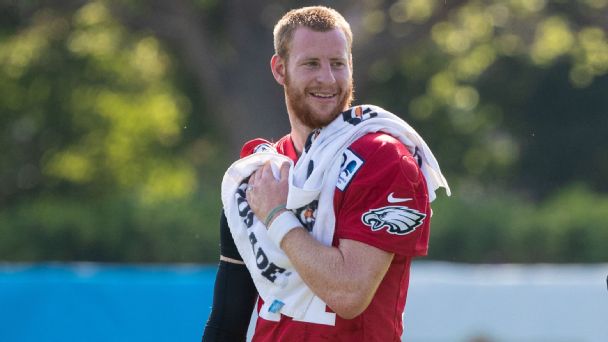 • Carson Wentz 2.0: Inside his offseason
• From N.J. mayor to Ravens’ kicking guru
• Andy Dalton brushing off the pressure
• Josh Jacobs hungry for shot at feature back
• Steelers’ hybrid defenders out to confuse QBs

“I mean, I’ll put myself in there all the time,” Bourne said, laughing. “I truly believe in everybody in that room. So, it’s like man, if he’s out there I know he’s gonna make the play, so it’s about just proving it all now until the time comes in the end of August and what they want to do.”

As it stands, Shanahan doesn’t sound like someone who is very close to having his mind made up, though that will change as the deadline for cuts approaches.

Traditionally, teams keep six receivers on their 53-man roster, though some will go one lighter or one heavier. In the Niners’ case, there appears to be eight players jockeying for what is likely six or seven positions.

Despite Lynch’s best efforts, that group doesn’t include a proven star along the likes of Odell Beckham Jr., who the Niners tried to acquire in the offseason but couldn’t land before he was shipped to the Cleveland Browns.

Training camp and preseason haven’t offered much clarity, not only in terms of how many and which players will make the roster but also in how snaps will be divvied up when the real games start.

“There’s a number of guys out there and we need that group to step up,” Shanahan said. “We have some ability in that group, but the consistency isn’t there. Of course, with rookies, but also the vets too. I’m expecting all those guys to do better and they all need to pick it up.

“There’s days that you can see one guy, but to separate yourself, you’ve got to do it day in and day out and I’m still waiting for that.”

Given their draft status and consistent improvement throughout camp, Samuel and Hurd are locks and the same is true of Pettis, who finished strong last season and was a second-round pick in 2018. Taylor looked like the best candidate to lead the team in receptions before suffering a Jones fracture in his right foot, though he’s expected back early in the season. Goodwin is the most accomplished over the past couple seasons.

If things go according to plan, Samuel and Hurd will play big roles sooner than later and join Pettis and Taylor as the present and future of the receiving group. Hurd and Samuel were slowed by injuries in the spring but have offered signs of progress throughout camp.

Hurd, a former running back who is listed at 6-foot-4, 227 pounds, projects as a potential starter at the ‘Z’ (flanker) spot, though he is also working at ‘F’ (slot) and could get more time there as Taylor recovers. Hurd has impressed with his aggression as a blocker, and his big, physical frame could give the Niners a much-needed boost in the red zone.

Samuel, meanwhile, is playing the ‘X’ (split end) spot, which requires a fearless, physical approach similar to what Pierre Garcon, the man Samuel is replacing, made a name doing.

While both rookies have taken steps forward, they have found themselves working mostly with the backups as Pettis and Goodwin get the majority of the first-team reps on the outside, with Matthews in the slot as Taylor works his way back.

Although Pettis played well near the end of last season, he’s had an up-and-down camp and the next step in his progression has come slower than expected. Add that to Taylor’s injury and Goodwin’s history of struggling to stay healthy, and the Niners might need Hurd and Samuel to contribute right away.

It’s fair to wonder if they’ll be able to perform at a high level immediately given all that Shanahan’s playbook encompasses and the general adjustment period required of rookie wideouts.

“I think they’re both smart, smart players, but they’ve impressed us with that they both have a ton of ability,” Lynch said. “I think they’re really doing a nice job. We expect them to keep improving, but I think we’re going to be counting on them right away. And I think they’ll be up to the challenge.”

Just how long the 49ers will have to wait for their receiver group to step forward is one of the most important early-season storylines the team is facing. While the Niners’ running backs and tight ends carried the freight for the passing game last season, the receiving group lagged.

In the latest episode, Peyton’s journey takes him to Baltimore, where his failure to include defensive stars on his journey leads to a confrontation with Ray Lewis.
Watch on ESPN+ » More »

Considering the success of tight end George Kittle and more known commodities such as running back Tevin Coleman in the backfield, it’s fair to believe opposing defenses will concentrate their efforts on slowing them down, forcing the Niners receivers to beat them.

And though there’s still time for the receiver group to define itself, the sooner that happens the better off the Niners will be, particularly in a crucial early-season stretch.

“Each guy is a little bit different, but we’ve got a bunch of guys who can play and I want someone to make the decision easy for us,” Shanahan said. “I want someone to take the job and make it to where it’s extremely obvious. We haven’t had that yet.”

The clock is ticking.

'Ambitious and aggressive': Inside the Chiefs' defensive overhaul - NFL Nation

Why did the Packers and Raiders play on an 80-yard field?